I wanted to be crafty and decorate our apartment for fall.  It all started when I wanted to carve a pumpkin.  When I realized that I would have to pay more than a dollar for a pumpkin, I decided I wanted to knit one instead.  I went on Ravelry and found patterns for pumpkins, leaves, and acorns.  I didn't start until halfway through October, so I was finishing my pumpkin on halloween.  I made leaves in four different colors and two acorns.  I crocheted a chain to hang them from and put it up in a doorway.  The bright fall colors make me happy.  Sometimes it's nice to take a break from big projects and knit something small. 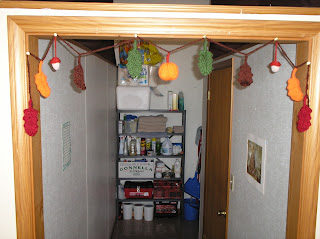 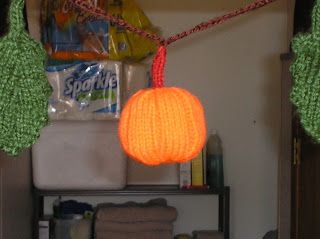 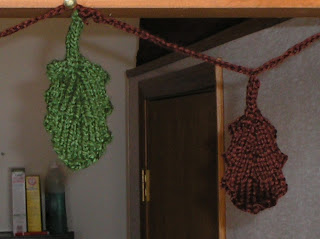 Posted by KnittingToInfinity No comments: Links to this post

Email ThisBlogThis!Share to TwitterShare to FacebookShare to Pinterest
Labels: My Projects

In April I started knitting the Slanting Gretel Tee from the Fall 2009 edition of Interweave Knits Magazine.  I love the design of this sweater and have enjoyed working on it.  However, due to some sizing problems, it has taken a lot longer than I planned.

There had recently been a KAL (knit-a-long) on knittingdaily.com for the Slanting Gretel Tee, so I read some of the posts.  Some people were saying that the pattern ran big, so since I usually make a size 32", I figured the size 30 1/4" would be perfect.

I cast on and knit blissfully for two months until I finished the lower body and then tried it on for the first time.  That's when I discovered it was way too big.  I had made the smallest size in the pattern, and my gauge had been correct, but it was a few inches bigger around the waste than I wanted it to be.  Naturally, I was reluctant to undo two months of work and start over.  I thought about just making it for someone else.  After a few days I decided that I was not willing to let my work go to waste by creating a finished product I was not satisfied with.  I unraveled the whole thing.

The pattern said to cast on 196 stitches.  I decided to make my smaller version with 172 stitches.  I also ended up changing the shape of the sweater.  I realized that the pattern produced an A-line shape that started out wide at the bottom and gradually got smaller, so that it was closer-fitting at the bust line.  Since I am a small person who doesn't like to wear loose clothing, I wanted to make it wider at the hips, smaller at the waist, and wider again at the bust, resulting in a close fit that would complement my shape.

I tried my sweater on more frequently this time.  In the pattern, the chart for the lower body includes five decreasing rows.  I only did the first two decreasing rows.  (Since I was starting out with fewer stitches, I did not want to decrease too much.)  My next resizing move was to increase eight stitches for the bust line.

I am now past the bust line and working on the sleeves.  It is fitting really well, and I am hoping to finish it in a few weeks.  I am really glad I decided to start over.  I will have a sweater I feel more confident about wearing, and I learned a little about altering a pattern to fit my shape better.  Even though I knitted for two months before realizing I needed to start over, I don't feel like it was time wasted.  For me, knitting isn't just about the finished product.  I enjoy the process, and practice is never a waste.

Posted by KnittingToInfinity No comments: Links to this post

Sign up here to get my new posts in your email.

I wrote a review on the Shawl Star ebook from Knotions magazine. You can purchase through my affiliate link here.